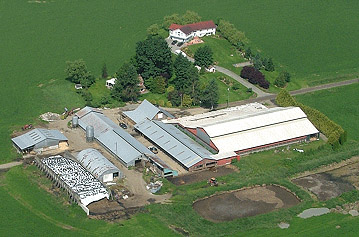 Who would have thought that installing a Duro-Last® Cool Zone® Roofing System on a barn would improve the milk production of cows ... but that is exactly what happened in Chilliwack, BC.

In 1980, dairy farmer John Wynker built a 31,000 square foot barn on part of his property, Artique Farms Ltd., to house his herd of 160-170 dairy cows. Over the years, the existing metal roof began to have issues. It contained a sprinkler system used to cool the barn and keep the temperature down for the dairy cows. Although the sprinkler system did not work well, it still helped with the excess heat created from the metal roof. However, this sprinkler system and the failed metal roof produced other problems --- leaks everywhere.

Wynker needed a new roof that was durable, leak-proof, and would keep his cows cool, safe, and dry. Wynker contacted John Grimard, owner/operator of JG Roofing in Chilliwack, to see what he recommended for the structure. After Grimard inspected the barn and considered the qualities Wynker wanted, he suggested installing the Duro-Last Cool Zone Roofing System.

According to Grimard, the white Cool Zone membrane would be the perfect fit for the barn because it is durable, leak-proof, and virtually maintenance-free so that Wynker would not have to worry about it once the roof was installed. Plus, Grimard explained that the Duro-Last Cool Zone roofing system could save him money on energy costs for the barn during the summer months.

Wynker liked the thought of saving money, but little did he know the true benefits of the Cool Zone roofing system --- that is until he installed it.

Once Grimard received the go-ahead from the farmer, he measured the existing roof and then ordered the prefabricated single-ply membrane from the Duro-Last manufacturing plant in Grants Pass, Oregon.

"The Cool Zone system's prefabrication is terrific for a project like this," said Grimard. "Since Duro-Last performs a majority of the membrane seaming in their controlled factory environment, the potential for rooftop installation errors and leaks is reduced considerably. Plus, the Cool Zone membrane is produced in prefabricated sheets of up to 2,500 square feet, which made the installation easier and less labour intensive."

Grimard's crew went to work. They re-roofed the barn without a tear-off, avoiding potential problems such as accidentally dropping materials into the cows' feed, which could have proven harmful to the animals. The crew also added insulation and ventilation to the barn and removed the old leaky sprinkler system, leaving only the existing fans in place. 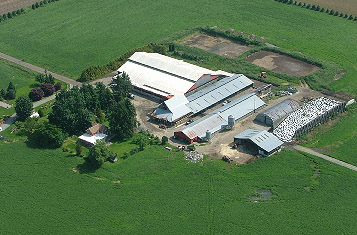 "The installation went smoothly and John was very happy with the results; an aesthetically pleasing roof that would protect his dairy cows," noted Grimard. "Another benefit of the Cool Zone roofing system for the barn was its flexibility. A large barn tends to expand and contract with wind and temperature changes, and the Cool Zone system allows this to happen without jeopardizing the performance of the roofing system."

Shortly after the installation, Wynker discovered other benefits that surprised both him and Grimard. Just one week into the project, the herd's milk production increased to the point where the holding tank started overflowing. Wynker determined that the increase was due to the barn being cooler. He found that in hot weather, his barn stayed cooler with the Cool Zone roofing system, which helped reduce the dairy cows' stress level and resulted in their giving more milk ... that's right ... the cows were comfortable and cooler so they produced more milk!

"I was very surprised with the results," recalled Wynker. "Upon installation of the new Cool Zone roofing system, the temperature in the milking facility dramatically dropped in the summer. Prior to the Cool Zone installation, we had all of our fans continually running at full speed. After the new roof was installed, we found that we turned the fans on later in the year, turned them off sooner, and did not always have them running at full speed. We definitely notice a large difference in temperature when we walk into the barn."

"I was able to cut six cows from the herd and still increase my milk production," noted Wynker. "It was incredible! Plus, we realized how quiet the barn was when it was windy or raining. The old metal roof was always very noisy during bad weather."

Yet, that was not all ... during the winter months, Wynker concluded that the barn stayed warmer and prevented the cows' watering troughs from freezing. "In the past, we had problems with the drinking water for the cows freezing," said Wynker. "But with the added insulation and Cool Zone roof, that isn't a problem anymore."

The best news for Wynker --- he saved money and received a leak-proof roof! "In the first six months, I saved about $22,000 in operational costs and attribute about 90% of that to the Cool Zone roofing system and the remainder to the added insulation," said the dairy farmer. "That translates into saving approximately $44,000 a year AND my roof no longer leaks!"

The Cool Zone roof provided a leak-proof shelter for the dairy cows. It created a cooler environment in the summer and a warmer one in winter for the herd. In return, the cows were more relaxed, producing more milk. Wynker was then able to downsize his herd, while also selling more milk (a 10-15% increase). His dairy business benefits by making more money through increased milk production with fewer cows, and enjoys savings from lower energy costs, less building maintenance and healthier cows, due to fewer veterinarian bills. 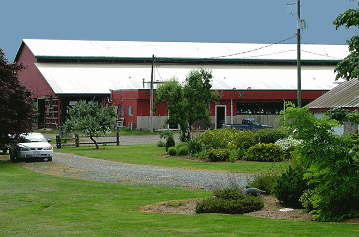 "The health problems we used to encounter with the cows have gone down tremendously," stated Wynker. "Reproductive health through the summer months is no longer a problem. That alone has saved me a lot of money."

"We were very pleased to hear how our roofing system has helped John Wynker and his dairy business," said Duro-Last Vice President of Sales Steve Ruth. "It makes our job much more valuable when we know that our roofing system not only provides a durable shelter for building owners, but it also saves them energy and money."

"We would recommend a Duro-Last Cool Zone roofing system to anyone who is considering putting a roof on a livestock building," said Wynker.

Now this is a true Duro-Last success story for a dairy farmer in Chilliwack, British Columbia!

APPRENTICESHIP PROGRAM  - Published in the Chilliwack Times, May 13, 2005